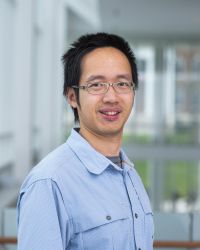 My name is Quanzhi Ye. I go by Quanzhi or QZ for short. I am a planetary astronomer at the University of Maryland. Currently I am also holding a Visiting Researcher appointment at Boston University.

I am primarily interested in the small bodies of the solar system – namely asteroids, comets, and meteoroids. I use a wide range of techniques to study these intriguing bodies. I have used the Canadian Meteor Orbit Radar to study meteor showers, as well as the Zwicky Transient Facility (ZTF) project at Palomar Observatory to find near-Earth asteroids and comets. I also help maintain the NASA Planetary Data System Small Bodies Node.

I was captivated by the stars when I was a child. Nowadays I still enjoy going out for stargazing every once in a while. Besides stars, I also like music. I play violin, viola and cello in various orchestras and string ensembles as I move from China to Canada and then the US. Most recently, I played viola and cello in Caltech’s wonderful Chamber Music program. 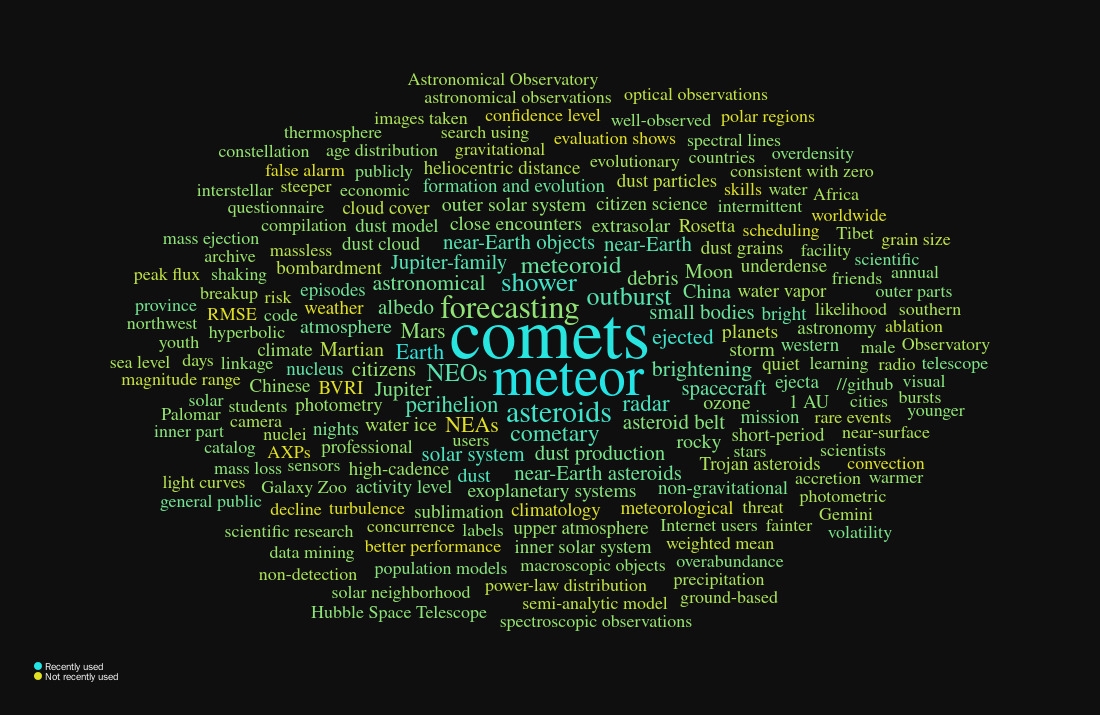 The keyword cloud above is generated using Scimeter on 2021 April 19. You can find a list of my publication on NASA/ADS or Google Scholar. 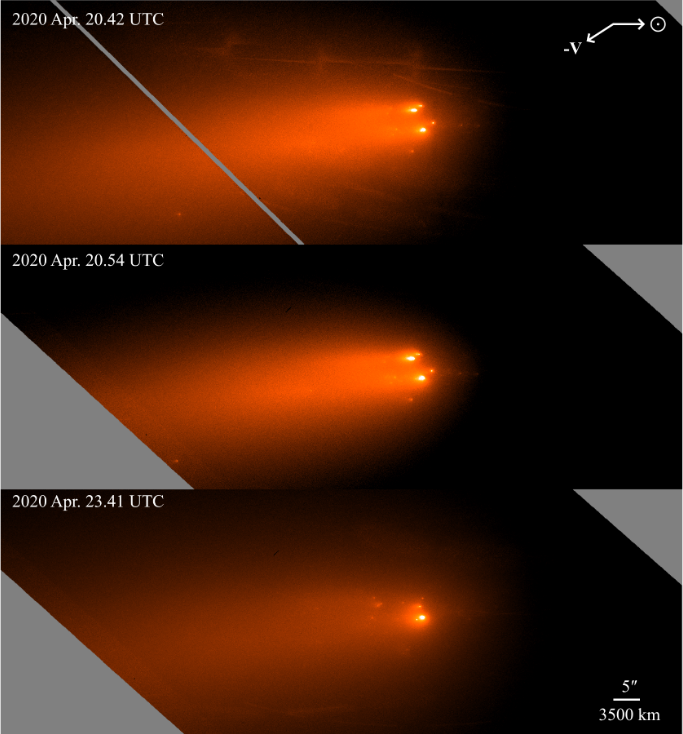 Comet C/2019 Y4 (ATLAS) generated quite a bit of excitement when it once held the potential to be the “Comet of the Century” but eventually disrupted two months before reaching perihelion. Despite so, it is still an exciting object as it is the first member of a long-period comet group observed to disintegrate well before perihelion. We used the mighty Hubble Space Telescope to observe the comet as it fell apart and found direct evidence of a non-uniform nucleus: one part of the comet is more fragile than the other; and additionally, the comet supposedly passed extremely close to the Sun during its last return but failed more than 4 times farther away from the Sun this time, which is very intriguing. In an earlier work, we discussed and confirmed the sibling relationship of C/2019 Y4 and a bright comet that appeared in the year of 1844. 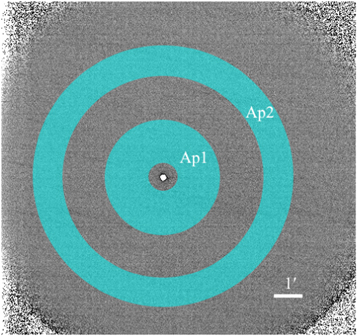 (3200) Phaethon is a mysterious object: it is associated with the strong Geminid meteor shower, implying that it had been highly active in the past, yet decades of observation showed that it is largely inactive. Using the mighty Lowell Discovery Telescope, we conducted one of the deepest searches for signs of Phaethon’s activity. Although we did not find anything, we placed a stringent constraint on the upper limit of Phaethon’s activity, which may help the forthcoming DESTINY+ mission, set to launch to Phaethon in 2028. In a different paper, we also used the Hubble Space Telescope to search for small fragments recently ejected from Phaethon. 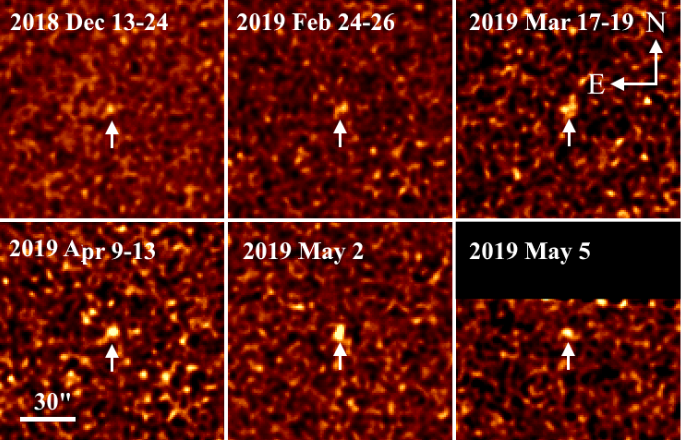 As the second anniversary of the discovery of ‘Oumuamua was approaching, Ukrainian astronomer Gennadiy Borisov found the second interstellar object, and this time – unlike ‘Oumuamua – it is an unambiguous comet. We look back in time and search for pre-discovery detections of 2I. We found not one – not two – but pre-discovery detections over six different epochs, with the earliest being almost 9 months before the discovery of 2I! These detections allow us to say something about the composition of 2I. 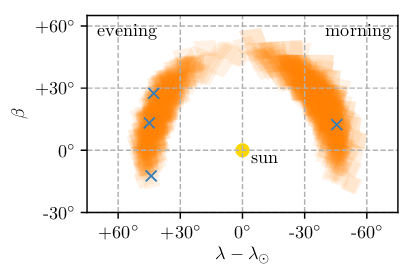 “Don’t aim your telescope near the Sun,” they say, but at Zwicky Transient Facility we gave it a try. Not during daytime of course, but during the brief twilight hours. The goal? Explore the innermost region in the solar system. By going about 10 degrees closer to the Sun than other surveys (and, of course, have to endure brighter background and sub-par image quality), we found two km-sized (large!) Interior-Earth Objects during our 7-month survey. We also unsuccessfully looked for Earth and Venus co-orbital asteroids, asteroids that share the same orbit with Earth/Venus. 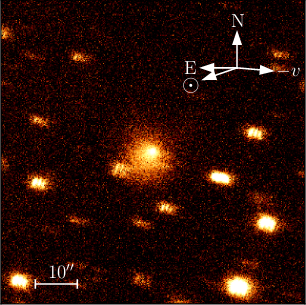 How can the smallest (known) comet generates one of the largest (known) comet outbursts? We are curious too. Here comes comet 289P/Blanpain, a comet that was lost shortly after its discovery in 1819, only to be rediscovered 200 years later as a weakly-active comet that is only 300-m in size, the smallest comet ever known. It suddenly brightened by a factor of 1,000 in 2013, with a broad, short tail. We found that its sudden reappearance in 2013 was caused by a mega-outburst that released 100 thousand tons of dust, that is (a bit surpisingly) only 1% of its total mass. We proposed that this outburst was triggered by the crystallization of amorphous water ice. Bonus: 289P is returning at the end of 2019! Whether it will reemerge as a healthy comet or disappear entirely is beyond anybody’s guess.

I enjoy talking to the public about my research. I have written over 50 articles for popular science and have given over 80 public talks since 2004. Most of my outreach work was done in China and/or in Chinese/Mandarin. But whenever I got a chance, I make an effort of going out of my comfort zone and speak to the audience/journalists in the US!

Some of my recent outreach work in English:

If you are curious, here are some of my Mandarin-speaking podcasts:

You can find me on Twitter or Weibo (Twitter-like service in China).

Chinese names start with the family name followed by the first name, though most Chinese in the West follow the general Western order and put their first name first. This includes the author list in most publication. Hence, even though my name is listed as Quanzhi Ye in most of my papers, it should really be spelled as Ye Quanzhi, where Ye (pronounced as “Yeh”) is my family name and Quanzhi (pronounced as Ch’üan Chih, but I am okay with whatever pronounciation convenient to people) is my given name.

“Ye” (叶 in simplified Chinese, 葉 in traditional Chinese) means “leaf” in Chinese. Ye is also romanized “Yeh”, “Yip”, “Ip” in different spelling systems and variety of spoken Chinese (e.g. Cantonese), and “She” in ancient Chinese. The surname originated as a clan name after the Duke of Ye, the Prime Minister of the State of Chu at circa 500 BCE. Confucius visited the Duke of Ye (She) in 489 BCE, and their conversations were recorded in The Analects. If you wonder, “Quan”/泉 means spring (source of water), and “Zhi”/志 means aspiration, so my first name means something along the lines of a source of ample aspiration that runs like spring water, with some reference to my surname since leaves need water.